It turns out we left Phong Nha just in time. I was contemplating staying one more

night but in the end decided against it. As we were leaving the rain that was coming down was some of the hardest I’ve ever experienced and it turns out this rain didn’t stop. The next day, once in Tam Coc, I was sent some photos from a friend who stayed the night and there was over 1 metre of water inside the hostel, the road and central reservation had been totally washed away and it was crazy to think we were there 12 hours previous. I suppose it was good weather for all those ducks I met though! To get to Tam Coc from Phong Nha there is a night bus that’s scheduled to leave at 21:00 every night, arriving in Ninh Binh

at 05:15 and costing 200000 Dong. We asked the bus driver to drop us in Tam Coc, about 4 km from the Ninh Binh as this is where we had booked our hostel. We left just after 9 PM and arrived at 03:35, over an hour and 1/2 early and didn’t know what to do as we thought that no where would be open at this time. Luckily there was a coffee shop open opposite where the bus stopped and the owner kindly invited us in to have a coffee and wait for our hostel to open as it did not have 24 hour reception. He had a 20 day old kitten so I sat and played with it for over 2 hours.

Our first two days were a write off. The first because of the little to no sleep we had on the night bus, and the second because of the amount of rain. No where near as much as they had in Phong Nha, but still enough to not be able to cycle around like planned. We did catch a taxi to nearby Ninh Binh costing 70000 Dong (£2.20) for the 7 km journey. I wouldn’t say this was really worth it, however we did have some great food in Trung Tuyet, a restaurant where even the small portions are the size of a house. It was cheap, in the evening you get free beer with your meal and the food was lovely, it is the only thing I would recommend about Ninh Binh. The scenery in Tam Coc however was beautiful, and on our third day after the rain finally stopped we rented some bikes from our hostel. We first cycled to the Mua Caves and hiked up the 500 or so steps so see the beautiful views of the river and the karst mountains, we then carried on to Trang An and took a 2.5 hour boat trip down the river, through 9 different caves and getting off to explore 3 different temples. The boat trip costs 150000 Dong and there are plenty of food options at the dock if needed. There are literally thousands of 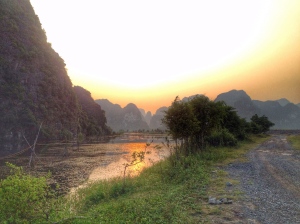 boats lined up, each carrying 4 people, and more often than not being paddled by a little old lady. The scenery was amazing, like nothing I have ever experienced before (until I got to Halong Bay) and for some of the caves you sail through you have to duck down so as not to hit your head. The water is so clear you can see fish darting around, there are some crazy ducks which dive bomb into the water and pop up a couple of minutes later and the scenery is picture perfect, with not a drop of litter in sight. The trip perhaps goes on for a little too long, especially as the little old lady gives you oars to help out if she needs you to, but it is definitely worth the visit. Afterwards we cycled back to our hostel and had ended up cycling around 20km that day. 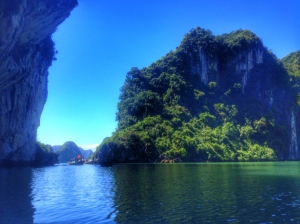 The next morning we caught our bus to Halong, this cost 180000 Dong (£6), was due to leave at 06:30, actually left at 07:00am and dropped us in the outskirts of Halong at 11:30. It was a very weird bus journey. The driver would stop every 20 miles or so, run out the bus and speak to someone or drop off a little parcel, get back on the bus and speed on. I can only assume what was happening but the word speed probably had something to so with it. We didn’t even get dropped in Halong, we were dropped at a taxi rank around 10km away so we were forced to either catch a motorbike taxi or a normal taxi to Halong. We hadn’t sorted out a hostel, so had nowhere to be, and as we were trying to sort this out a man kept following me around. I was polite with him to start with, but everywhere I walked he would follow me shouting “where you going, motorbike taxi!” He wouldn’t leave me alone. In the end I just ignored him and jumped into a taxi, asked for the metre to be turned on and for him to head towards the bay. Here we got

out, found a restaurant for lunch and found a hostel for £4 a night. Halong wasn’t a great experience, the town itself is a horrible construction site, with half built buildings and theme parks started by Chinese construction companies and then abandoned half way through. Our plan was to go straight to Cat Ba Island, an island out in Halong Bay itself. The only problem with this was the approaching typhoon. We booked a boat trip to go kayaking in the bay, then planned to be dropped off at the port for the ferry to Cat Ba. However on the Tuesday morning our boat trip was cancelled due to high winds in the bay and the ferries were cancelled as well, damn Typhoon Sakira. There was nothing left for us to do but lock our self away in our hostel, waiting for the typhoon to pass, we would have explored the area but I didn’t fancy walking round a building site. After two days of relaxing, planning and catching up with things the bay was back open so we could go on our boat trip. The trip costs 450000 Dong (£15) for 4 hours and included a walk round a cave, kayaking through the bay and a 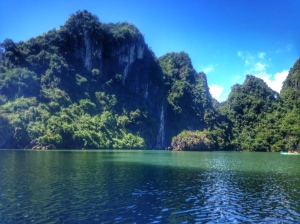 cracking view of the karst mountains sprouting out the sea, it really was a magical place. We had a quick discussion and decided not to go to Cat Ba Island, and instead catch a bus to Hanoi for 150000 Dong (£5) to meet up with Naomi and Jesper, the two Dutch guys we’d travelled with for a bit further south in Vietnam. I’ve heard mixed reviews about Cat Ba Island and I believe tourism has taken over. It’s a shame but this has really ruined Halong, even though out in the bay is amazing, there are boats and tourists everywhere and way too many half built buildings in Halong. I’m now on my way to Hanoi to purchase some more insulin before continuing north to beautiful Sapa.

One thought on “Tam Coc and Halong Bay”