You can spend a lot of time in Ho Chi Minh doing nothing, well pretty much nothing. Everything is so cheap, currently speaking £1 = 29850 Dong. You can pick up a meal for 30000 Dong (£1), a beer for as cheap as 20000 Dong (£0.70) and accommodation for 120000 Dong (£4) a night. There are coffee shops everywhere serving delicious coffee either hot or iced for as cheap as 15000 Dong (£0.50). The one thing you have to be careful of as a diabetic is that the milk they use in condensed milk so each coffee has a lot of sugar in, you’ll find yourself doing about 10 injections a day!! There is a wide variety of food available with influences from a lot of different countries, especially France, who occupied Vietnam for nearly 100 years. The free breakfast that is included in your £4 a night hostels is usually freshly baked baguettes bought from the local bakers and served to you with either 2 fried eggs or jam. I like it when a free breakfast is included in the hostel price as it saves you a lot of hassle in the morning, and if your sugar level has run low in the night

you don’t have to search the street looking for food, however that wouldn’t take long in Saigon. Every Vietnamese local I spoke to in the city still refers to Ho Chi Minh as Saigon, so I’m going to do the same. Crossing the street in Saigon is crazy, there are currently over 7.4million motorbikes which all seem to be on the road at the same time, along with bicycles, cars and buses. When you make it to the other side of the road you feel like you’ve won Total Wipeout. There is a certain way to cross the road however, when the traffics lights are red you can go, when the traffic lights are amber you can go and when the traffic lights are green, yep you can go. Just keep a steady pace when crossing and make eye contact with the oncoming traffic and they tend to swerve around you. Some people think they are Valentino Rossi and will zoom in front of you at the last second but trust me, you’ll make it across unscathed…

To get to the city from the airport there is a yellow bus, number 109 that leaves from outside the airport terminal exit. You can buy your ticket beforehand from the little stand by the bus stop. The ticket costs 20000 Dong if you are travelling over 5km. We got off the bus at Ben Thanh Bus Terminal which is very close to the backpacking scene with lots of hostels around and very close to Bui Vien street, the street with loads of bars and restaurants. There is someone on the bus telling you when you need to get off so don’t worry about that, there are a few stops before hand, just show them your ticket and they’ll do the rest!

Once in Saigon and settled in your hostel its time to go out and explore.

You will quickly realise that its not worth taking public transport or a taxi unless it necessary due to the business of the streets. Even if your destination is 3km away I would say its better and probably quicker to walk and stop along the way in the multitude of cafes for a delicious coffee. Even though there is so much going on there is a lovely relaxed atmosphere throughout the whole city and it is weirdly relaxing. Our first stop was the Independence Palace, also know as the Reunification Palace. This costs 30000 Dong (£1) for an entry ticket and was the home and workplace of the President of South Vietnam during the war. It was the site of the end of the war when a North Vietnamese army tank crashed through its gates. It’s basically a collection of meeting rooms and you can see the living quarters of the president. Don’t forget to go to the basement to see the bunker! From here you can walk over to the War Remenants Museum, but be aware this is closed for lunch between 12:00-13:30. I found this museum fascinating and incredibly interesting but also quite distressing. There is a collection of photographs taken during the war which are amazing yet very graphic. There is also a section on the effects that the chemical Agent Orange had on the citizens at the time and how it effected them later on in life, including pictures of their children and the deformities that occurred. There is a nice restaurant a 2 minute walk from the museum, opposite a school, where you can grab some local Vietnamese food and a much needed beer after the stress of the pictures. I ordered a beef noodle soup for £3 and the beer was £1, perfect. It is worth visiting the museum before going to the 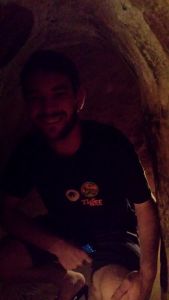 Cu Chi tunnels to gain a better understanding of the war.

The Cu Chi tunnels are fascinating and where a lot of fierce fighting took place during the Vietnam War. Well all of the Vietnam War was fierce to be honest. This is a 250km network of underground tunnels that were used as hideouts, traps, living quarters and supply routes for the Viet Cong during the war. I would recommend booking a half day tour in order to see this as public transport options are not so good, you have to change buses 4 times and as its such a popular destination tour companies offer very competitive prices. We paid $6 for our trip which didn’t include the entry into the tunnels which cost 110000 Dong. That was a half day trip, plus a guide who had some great information and knowledge of the tunnels, the war and the traps for £8.30. I was told the tunnels would be small but I didn’t realise quite how small they would be. There is a 120 metre section you can enter to experience the tunnels and the way they lived, with exits every 20m if you start feeling claustrophobic. I only made it 100m as an old knee ligament injury started playing up due to the crouch position I was walking in, it hasn’t been the same since I tore the ligaments 18 months ago, but that’s a story for another day!

Ben Thanh market is a great place to buy cheap clothes and souvenirs. There is an outside section and an inside section. I much preferred the outside part as you could hardly move when you were inside. It is a great place to perfect your haggling skills. I ended up getting 2 t-shirts and 2 football shirts for £11, as after 3 months of travel my small amount of clothes were starting to get ruined. I managed to get a Real Madrid shirt down from 300000 Dong (£10) to 100000 Dong (£3.30). It was definitely a fake shirt but it was nice to have some new clothes. I also got a Vietnamese football shirt, a Tiger Beer T-shirt and a red T-shirt with the Vietnamese star on. Not bad all for £11. There is also a big food market at Ben Thanh with a wide variety of local and foreign dishes and tons of benches to sit at the front and the back of the hall. You go up and order your food and if its going to take a long time they tell you to sit and they’ll bring it over to you. I mixed and matched a couple of different dishes from different stalls. Fried rice from one, chicken satay from another and so on.

More attractions of note include the Notre Dam Cathedral building, a replica of the one found in France, more evidence of the French ownership. This is situated next to the post office, a beautiful old yellow building which is still running today and a great place to buy some post cards. From here its about a 30 minute walk, longer if you stop for a coffee, to the Jade Emperor Pagoda. Built in 1909 this spectacularly atmospheric temple is filled with Buddhist and Taoist statues made of reinforced papier mache. There are some beautiful wood carvings, elaborate tile work and a pond filled with turtles climbing on each other’s backs out the front. From here take a meander along the river until you reach the Bitexco Financial Tower, also know as the Sky Deck. This costs 200000 Dong (£6.50) to go up to the 49th floor and see

unrivalled 360 degree views of the city. We chose to go up just before sunset, however it was a stormy day so unfortunately we didn’t see the sun setting. However we could still see for miles and the views as the lights came on at night were amazing. From up that high you really get a feel of how busy the city is, with lines of car and motorbike lights snaking this way and that through the city. I really enjoyed my time in Ho Chi Minh and would recommend it to anyone, there’s plenty of ways to fill your days, whether its reading in a coffee shop, visiting the sites and taking in the history, drinking in the bars or watching the world go by you will struggle to spend more than £20 a day.